Here's a wild flower that is worth accepting when it turns up in your vegetable plot.  Statuesque and brightly coloured this plant is widely distributed around the world and has many uses and superstitions attached to it.  The flower is surely enough to bring joy to anyone coming across it.  I seem to recall it being all the fashion at Chelsea a few years ago.

The leaves, especially the young ones,  are  soft like lambs ears and recognised as an excellent liner for shoes.  They are also dried and, in the past, smoked as a remedy for asthma bronchitis and catarrh

There is a structural similarity to foxglove, the first year's growth producing a rosette from which, in the second year the spire emerges rocketlike.


The flowers are a rich source of nectar, attracting bees and many other pollinating insects. 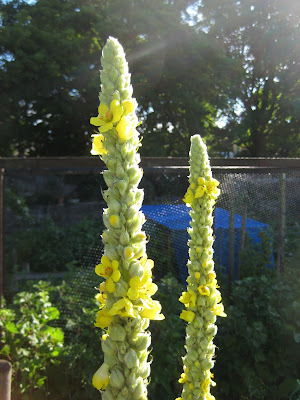 This is a powerful plant not recommended for human consumption.  The seeds are narcotic and have been used to stupefy fish. Reputedly a remedy for lice it is also used as an ingredient in shampoo, particularly for fair hair.

Another traditional use of Great Mullein (also known as Hedge Taper) is as a flaming torch.  The dried stems are dipped in tallow or suet to provide a reliable long lasting bright light.  The French Fete de Brandons on the first Sunday in Lent relies on this tradition to locate corncockles in the fields and remove them from the harvest crop (as they spoil the crop).  This use always conjures up an image in my mind of a mob of country yokels advancing with pitchforks.  Here's a suitable candidate for this purpose: 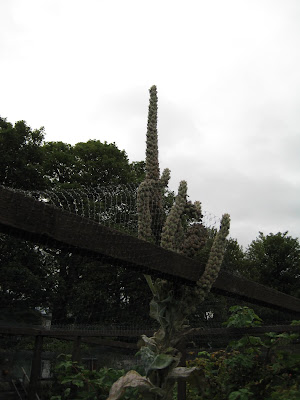 As you can see they grow up to 10ft  and if damaged produce multiple heads.  There is an associated superstition connected with this plant.  The gist is that you name your true love's name as you twist off the head of the plant. If it recovers they return your affections - and the number of new flower heads that subsequently develop indicates the number of offspring resulting from your union.

Other ailments Mullein has been said to cure include warts, earache, bed wetting, boils, rheumatism, gout  and last but not least parrot bites!  Amongst these there may be some tall stories for this tall plant.

Email ThisBlogThis!Share to TwitterShare to FacebookShare to Pinterest
Labels: weeds

Mal
Allotment holder for 20+ years. Formerly of Mal's Allotment blogsite but ran out of space. Switched here 25/11/12. My main aim is to record progress at the allotment, but I sometimes digress.