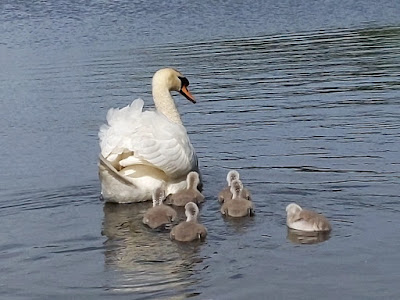 It is such a busy time of the growing year that I have been neglecting my blog. Here are a couple of pictures of recent landmark events. Firstly there are six surviving cygnets from this year's brood on the pond.  And secondly we are harvesting asparagus in quantity (well enough for 2) from the sole surviving asparagus plant at the allotment. 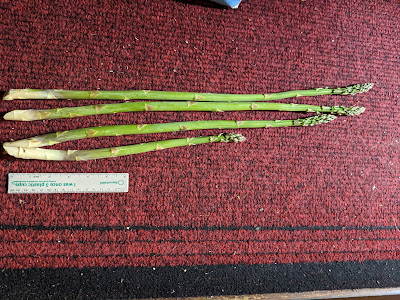 Picking Up At The Plot

I have been indulging my newfound interest in flowering plants and particularly wildflowers recently. Despite appearances I have been keeping up with the production of edibles too.  To bring the record up to date, here is a statement of the current state of play.

I went for alliums in a bigger way this year growing autumn and spring planted garlic as well as shallots and onions from seed. These were sown indoors in February .  The garlic has emerged and shallot and onion have been planted out on site yesterday and today.

Broad beans sown in cells and planted out a month ago are now sitting pretty at the plot. 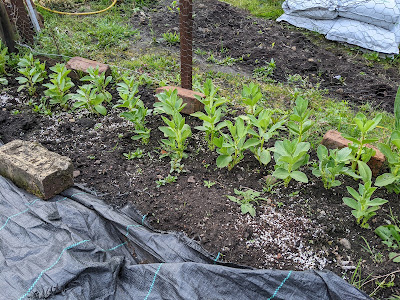 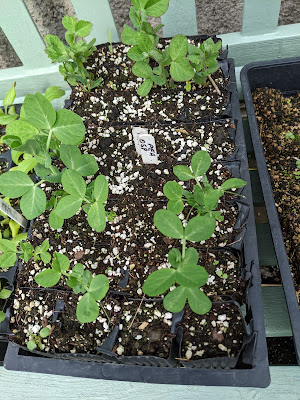 Peas on the other hand have refused to be cajoled into germinating early. As a last resort I have started them sprouting in a jam jar in the kitchen and only "sown" them in cells after germination and exporting them to the greenhouse and then the plot.

Still on legumes I have sown 5 varieties of Dwarf French Bean into deep cells in the hope that the improved night temperatures will help them get started. 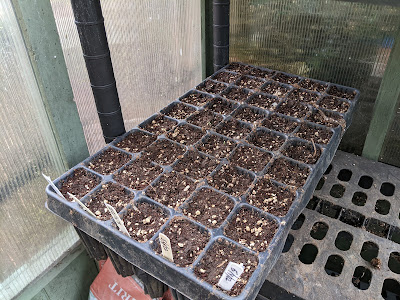 The greenhouse has been stuffed full each night with the paraffin heater lit on any night when the threat of frost is flagged up by the weatherman.  The main beneficiaries are flowers: Cosmos, Marigold, Lobelia, but also tomato, cucumber and pepper

I have attempted direct sowing at the allotment but tend to hedge my bets by using up remnant seed supplies (open packets from last year or out of date ones).  This way I don't get upset when they fail - although failure is also more likely as a result!  Parsnip, carrot, Swish chard have been experimented with in this way - and have all been resown recently..

Good Friday is a traditional potato planting day.  Easter Saturday and Sunday saw me getting all but the maincrop Rooster in.

The patch allocated to potatoes in my rotational plan still had "spring" cabbages at one end and leeks at the other.  Now that's what I call bad planning! The leeks are going into the cookpot.

but the runner beans have yet to be sown.  The courgettes squashes and sweetcorn haven't been sown either yet, but I have recently prepared a bed for them too.  My method is to bag all my weeds and trimmings in old black lined compost bags and leave them for a year or two to rot down in the hope that after another year buried underground any weed seeds will not be viable.  This keeps all the nutrients recycled on the site - all except the edible part of any crops.

Weed suppression is something I take very seriously.  The best method is to have a crop growing but failing that deployment of weed suppressant fabric in the early part of the growing season saves hours of repetitive weeding.  As the sowing season progresses so the aesthetically unpleasing fabric gets rolled back.

Brassicas tend to be at their best late in the growing year. None more so than purple sprouting broccoli which is currently in full production mode. 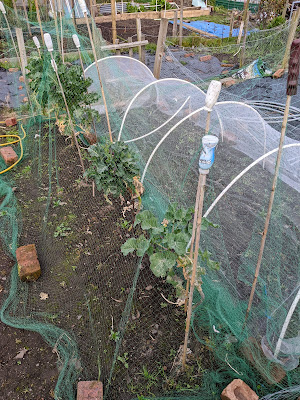 One again my lack of planning means the row of PSB plants is right in the middle of this year's carrot patch (under the fine mesh).  The PSB needs nets to keep the pigeons off while the carrots need fine netting to keep the carrot root fly off. so it is a bit of a logistic nightmare to cater for them both simultaneously.  As the early carrot sowing show no sign of germination yet perhaps there is no imminent prospect of running out of space just yet - the main crop carrots can wait until the PSB harvesting season is over.

This years brassicas and leeks are coming on at home in readiness for planting out. It iis going to be busy for the next month or two! 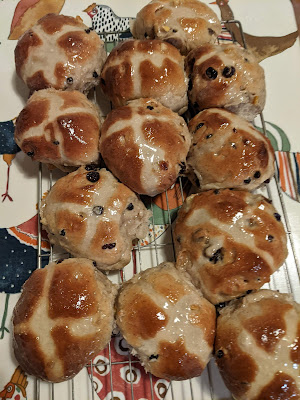 As is the tradition, here is this year's batch of HXB.

Out Of My Comfrey Zone 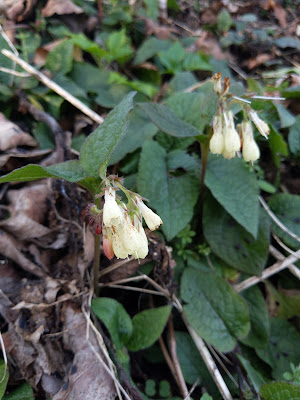 Sure I know Comfrey.  I grow it on my plot to make comfrey tea.  It is about two foot high and has a mass of green leaves and purple flowers from mid summer.  But that's not the whole story. I came across this bank in full creamy flower on an Edinburgh walk a couple of weeks ago.  Flowers cream not purple. Height no more than 15cm (6" in old money) , not 60cm, and in March! Wild comfrey only flowers from May. 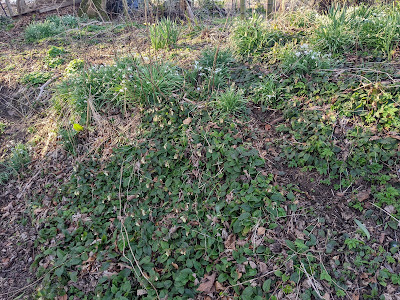 Going to the reference books I come across the idea that there are three Comfreys in Scotland. These are listed in the Poyntzfield Herbs catalogue as:

Now that makes sense of it. It is the Russian Comfrey I have at the allotment.  This is Tuberous Comfrey.
Posted by Mal at 13:36 1 comment: 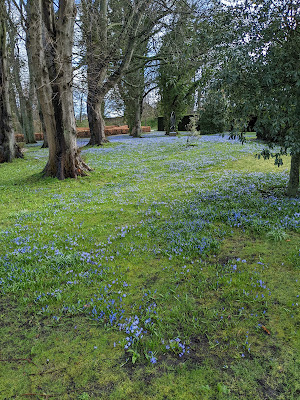 My last post featured snowdrops and I was asked if there would be bluebells in turn.  Well it is still too early for bluebells although a cursory glance at the picture above could fool anyone for a moment.  These are Scilla (formerly known as Chionodoxa).  There is Scilla liciliae commonly known as 'Glory of the Snow' because of its early appearance.  There is a white version 'alba'  and a related Scilla sardensis sometimes called the Siberian Squill despite not growing there.

The location of this carpet, while also Northumbrian is not the same as the snowdrops. It is Alnwick Castle Gardens. 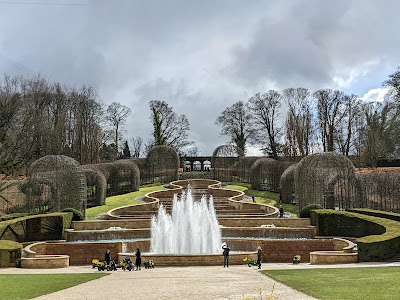 Just down the road at Hulne Park there is an almost apocalyptic scene bearing witness to the of passing storm Arwen. This is just one of many pine plantations similarly shredded last November. 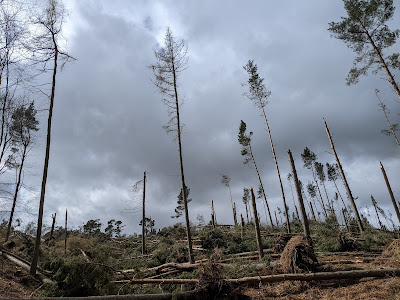 Back in the Castle Gardens the cherry orchard is thankfully unaffected and just about to burst into bloom in dramatic style.. 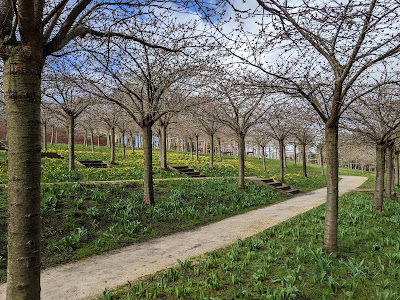 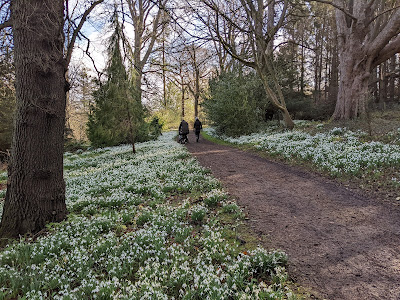 Taking a break in Northumberland with this seasonal display at Howick Hall. 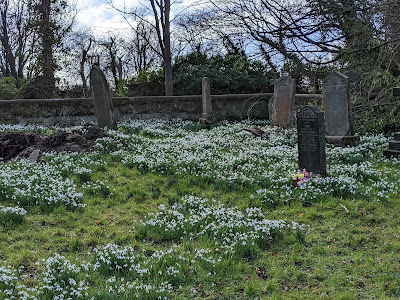 Email ThisBlogThis!Share to TwitterShare to FacebookShare to Pinterest
Labels: snowdrops 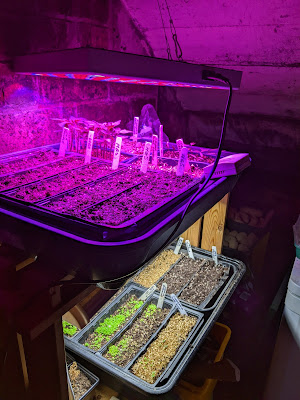 My coal cellar germination station is in full operation now.  The top shelf has LED lights whereas the lower legacy shelf is the traditional fluorescent strip light. Both shelves have got heated trays which raise the temperature to about 20C 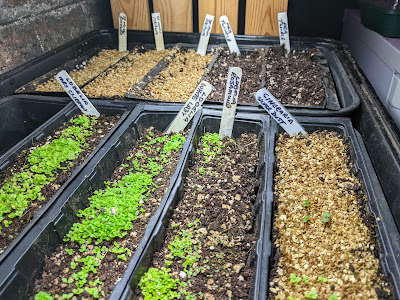 These lobelia seedlings are stealing a march.
Once germination has been achieved the hardier seedlings (broad beans and alliums) go out into the greenhouse... 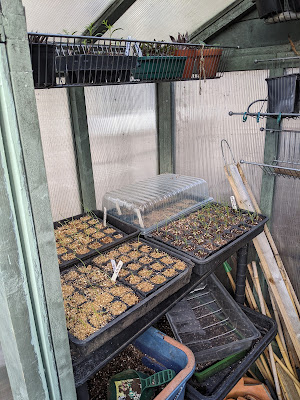 ...and then outside for good days. 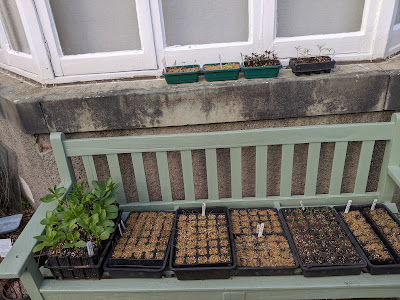 The broad beans to left of the picture went out to the allotment yesterday, under fleece protection to start with.  The set up has evolved over the years and seems to be working well this year.