Mugging Up On Mugwort 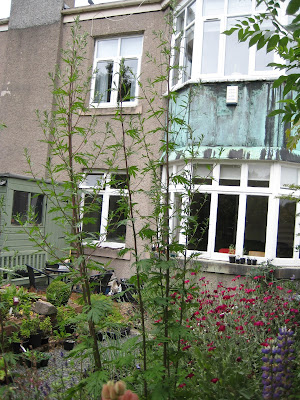 I sometimes tell myself only to pull out weeds when I can identify them first.  This is a bit extreme but sensible enough when you are dealing with flower beds into which you have sown seeds or planted out seedlings.  The picture above vouches for my adherence to this rule. Those stems are now over 6ft high.  But now I have finally identified the mystery weed as (drumroll)... Mugwort - Artemesia vulgaris. 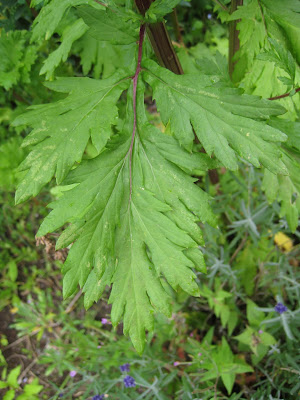 When it first appeared the leaves were like this (above) and I thought the delphiniums from last year might have self seeded. But later leaves look more like this: 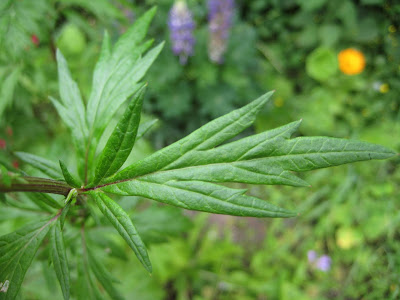 The reverse of the upper leaves have a silver down: 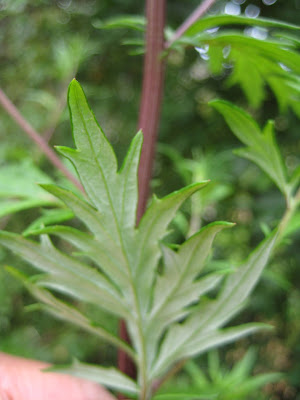 The mature stems are purple and ribbed. 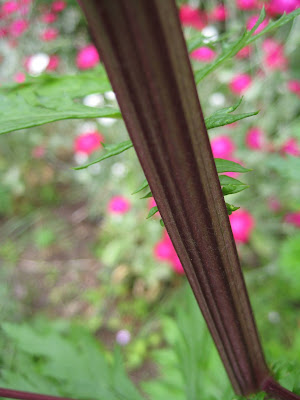 Often identification has to wait until the flowers appear.  After a long wait this appears to be the "flower".  Interestingly the reputed scent of honey is from the flower only. When I rolled a flowerhead between my palms there was a fleeting but unmistakable aroma. 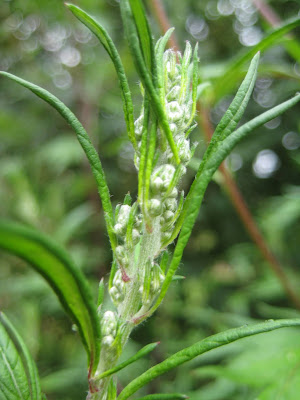 This is a new weed on me so I have had to mug up on it (sic). It turns out to be  a cure all with a long history.

Pliny (according to Gerard) said that travellers feel no tiredness and "he who hath it about him can be hurt by no poysonesome medicines, nor by any wilde beast, neither yet by the Sun itselfe"
It is also reputedly good for eyesight, childbirth, warding off evil spirits and curses as well as flies, intestinal worms and snakes.

Girdles, singlets, chaplets, hats have been fashioned from branches of mugwort.  For some reason casting them into the fire seems to be requirement, preferably on midsummers day which is often associated with this plant.

A symbol of happiness and tranquility it also has a reputation as a rampant weed, so now that I can name it I will be digging it up.  While doing so I will also watch out for the coal under its roots which is said to protect against "plague, carbuncle,lightning, the quartan-ague, and from burning" just by having it about your person!

Looking online there appears to no shortage of suppliers of dried mugwort leaf, probably nowadays  to be consumed as a tea for rheumatism. I might just save a few leaves dry and test their reputation for being good for your feet.  In Somerset there is a saying: Put mugwort in your shoes and you can run all day. Another theory is that the Romans grew it along roadsides to provide podiatric support for their legions on the march.

There's an awful lot of associations with Mugwort - enough for a museum:

Email ThisBlogThis!Share to TwitterShare to FacebookShare to Pinterest
Labels: weeds