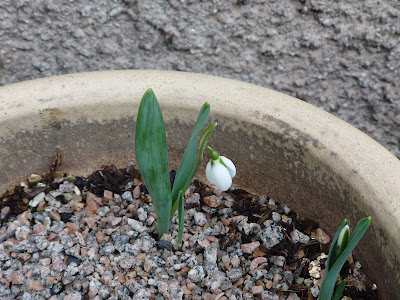 I never cease to be amazed by the early flowers. Amazed and filled with excitement and surprise that it is still January. 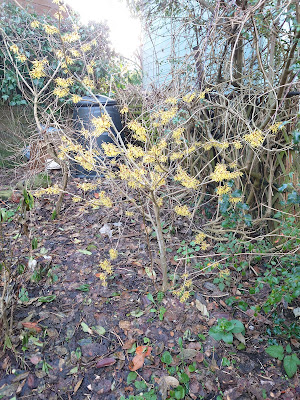 The witchhazel  is in full bloom. I am glad I didn't try to move it in the winter.

I repotted this garden rescue last summer and it is now paying back by flowering for the first time in years. (Now I just need to find a spot where it will be happy planted out).

All this activity makes me realise that I am already at risk of falling behind in my preparations for the 2023 growing season.

Now that the frost has lifted it has been harvest time for Jerusalem artechokes: 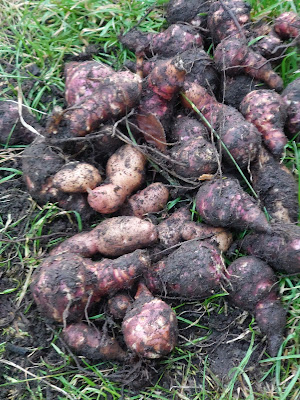 Carrots (protected by straw and netting) 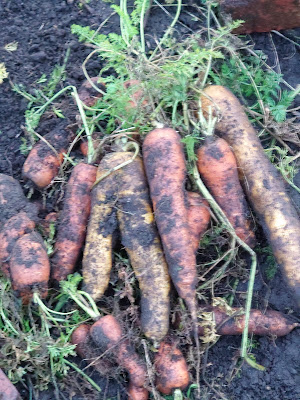 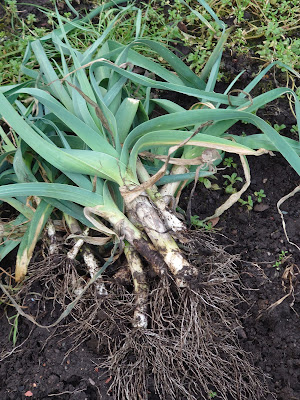 Here are some breads to bring some winter cheer too.

(The kulich is an Easter bread so a bit out of season, but I had plenty of dried fruit to use up from Christmas when I rather overbought.)

Winter on the Allotment 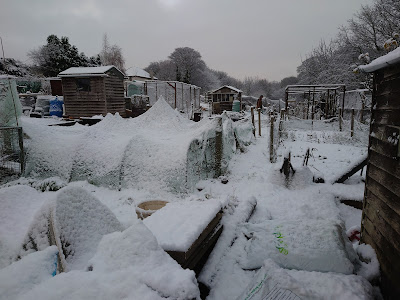 I wouldn't have been on site, except for the annual farm yard manure delivery on Saturday.  A couple of inches of snow fell during the two hours it took to offload the lorries and distribute the bags. With frozen fingers I took this snap and retreated to the warmth of home.  At least the nets have not collapsed. The temperature has since gone up and the dramatically down to -5C last night.  The prediction is for negative figures every night until Friday.

With the cold wind blowing it is time to enjoy some of the summer's stored treats: Sweet Dumplings squash.  One of these is just the right size for a person... 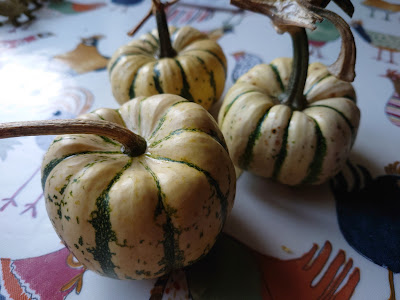 ...once stuffed and baked.

The kitchen pulley is serving its purpose as a drier of beans.  These net bags are suitably positioned so that if you don't watch out you bump into them on entering and leaving.  This, together with the occasional rummage ensures good air circulation.  As the Barlotti bean pods dry they start shedding beans - a sure sign that they are ready for podding! 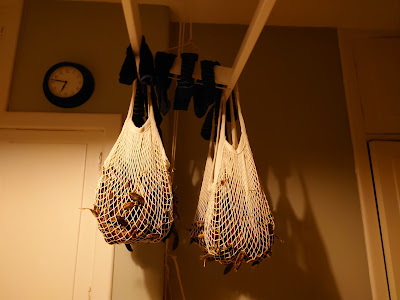 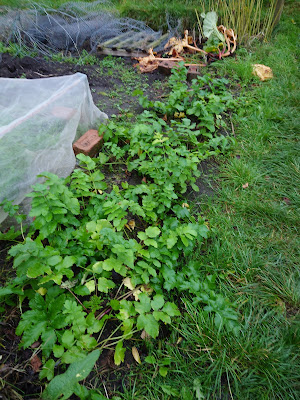 Change of month and change of season.  The beans, pumpkins and courgettes have accepted their fate and a new set of prospects for harvesting are coming into their own.  Parsnips are bulking up. Jerusalem Artichoke tops will die back and be chopped back ready for root harvesting in the early months of next year. (Note the rhubarb which has recently succumbed) 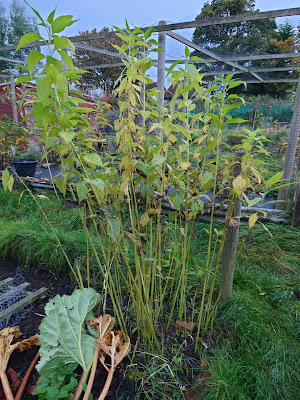 Coming into its own is the brassica patch: 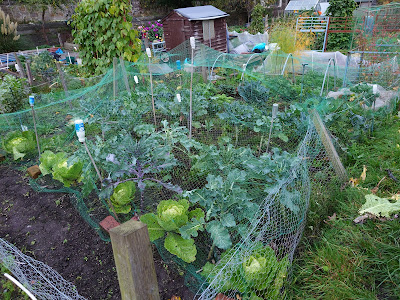 An autumn novelty this year is raddichio/endive/chicory. ( I don't intend to address the naming confusion in this post.  That is enough to sap anyone's strength.). Here we have the red round sort
And the red elongated sort

Suffice to say that on harvesting the first of these and grilling it and slathering it with balsamic vinegar it still tasted very bitter and went down like a lead balloon!  It breaks the first rule of vegetable gardening - to grow what you like to eat!
Thank goodness we do like artichoke, beetroot, carrots, cabbages,kale, parsnip and potatoes!
Posted by Mal at 03:21 3 comments: 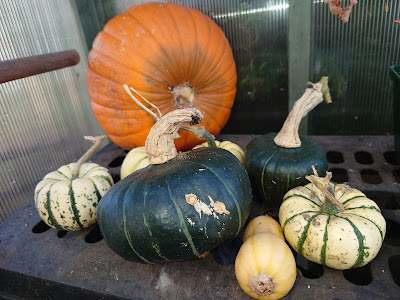 One week left of October. Clocks go back next week and Meteorological Winter stats. The pumpkin and squashes   have been gathered in and the Virginia Creeper  leaves having turned a deep red are now falling. 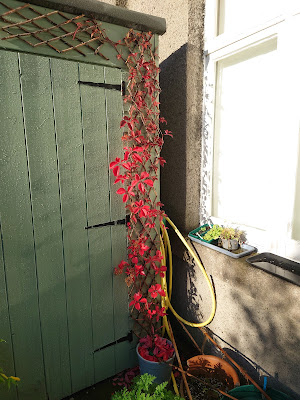 Warm and dry was the theme all spring and summer.  Warmth is welcome in Scotland, but dry is bad news anywhere.

The crops that suffered worst were sweetcorn and leeks. The sweetcorn I sowed too late (due to seed failure) and the leeks were sown and planted too early for the conditions this year. Another problem with the sweetcorn was cohabitation with  rampant courgettes (All Green Bush). which deprived them of light and no doubt water, despite generous applications.  How can the three sisters planting scheme (beans, sweetcorn and courgettes) work when the two sisters squabble with each other so?  On the plus side, the courgettes started strong and continued cropping at a rate of two fruit per plant per week right into October.

Runner beans, once they got going were similarly robust croppers.  I must admit that Dwarf French Beans, which start cropping a week or two before climbing beans,  get short shrift once the runners start cropping.  This could have something to do with the condition of my back - I hate stooping and the crop is well hidden by leaves just a foot off the ground. I gave an old favourite drying bean Barlotti beans Tongues of Fire a go again this year.  They are going strong, but I won't know exactly how well they have done until I have picked and dried them in their pods. The first are drying in a string bag in the kitchen, soon to be followed by the rest now that the nights are turning cold. 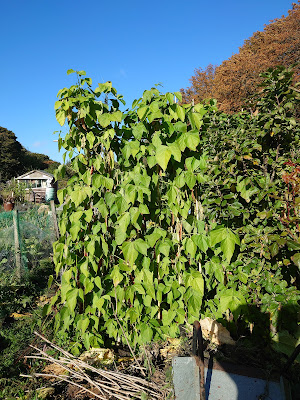 Still with beans, the beguiling offer of broad beans in autumn caught my eye in last year's seed catalogues. "Luz de Otono" translates from the Spanish  as Light of Autumn  or maybe Autumn Glow.  How could I resist?  Well it is autumn now and here's how the crop looks: 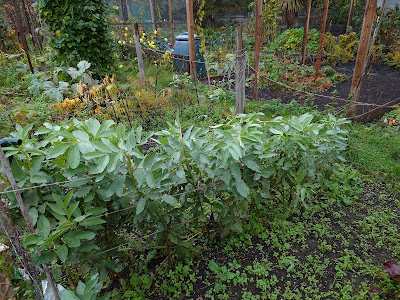 Some flowers  but not so many pollinators around.   These were sown on 5th August. "Too late" I hear you cry. Well the ones I sowed on 14th  July were an abject failure producing 5 pods  with tiny beans from the whole frazzled row! I will try to be patient with this lot in the hope they will pod up. Sadly a Spanish Autumn might be considerably warmer than a Scottish one.

Another Mediterranean plant I have gone large on this year is Basil.  The goal was to grow enough to make our own pesto.  This is one of three trays and yes the goal was achieved, thrice over.  Outdoors over the summer the trays have been given sanctuary in the greenhouse, indoors under lights, and the kitchen windowsill (as they approach the chop) before being turfed outdoors again. 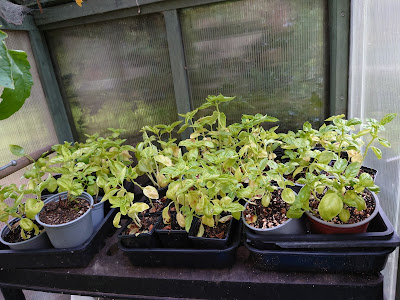 Another goal was to reliably grow a chilli pepper. I think I may have found the answer with Hungarian Hot Wax . Again they have been outdoors, in the greenhouse and indoors as dictated by climatic conditions and the availability of space. I will be growing these again next year. 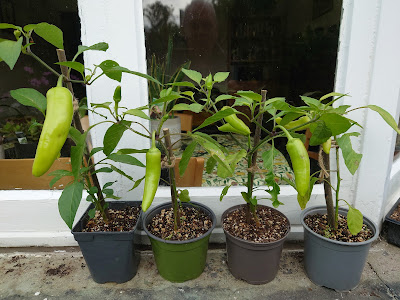 I have now planted next year's garlic.  This year's crop of Elephant Garlic and Solent Wight was underwhelming but provided enough for consumption and 'seed' for this year (bolstered up with a couple of bulbs of Caulk). I grew onion and shallots (Zebrunne) from seed with poor returns.  The ones that grew were fine but we ate the crop in a week or two. I do put this down to the conditions (dry), and will give them another go before resorting to sets again.

Potatoes emerged remarkably unscathed from the drought conditions. Carrots was a game of two halves. Only half of each of the four early rows survived, but what did grow was hugely successful and should keep us going until December. I have another long net of late carrots as yet untouched.

Parsnips were sown, but failed, sown again, producing 2 plantlets, then sown again. This time they were successful - but a bit late. I won't harvest any until the first frost.

Spring Hero Spring cabbages were a novelty this year and I am repeating the experiment over this winter too.  Other later brassicas suffered.  The Brussel sprouts in particular went all spindly and the sprouts which are now following are very small and disappointing.  Early purple sprouuting broccoli  started sprouting really early.  Thank goodness for kale (Red Russian, Dwarf Curled and Cavelo Nero) which have all bounced back.  Cauliflowers, overwintered and new season, were uniformly unproductive.  I suspect they are boron sensitive, and the soil is lacking. This diagnosis may have been influenced by my yellow cabbages.  The joke is that I have been growing a variety notorious for being yellow:  Bloomindal Geel.  Geel is Dutch for yellow! They are also notorious for needing lots of space. On the plus side they have a great flavour.

Traditionally Swedish Turnip or "Neeps" grow well in Scotland.  The specimens in  my row are  still very small.  Perhaps the rain will revive them.  Perhaps the weather was not very Scottish this summer, or perhaps they were hemmed in and overshadowed by other brassicas. You can take intercropping too far!

So the dry and hot summer of 2022 has produced some unexpected results and proves the old saw that if you grow a wide variety of crops, even if you have failures, something will prosper.

Looks like it's curtains for the tomatoes, given the turn in the Scottish weather. 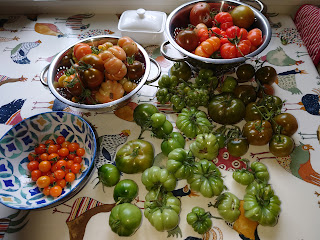 As in previous years Sungold cherry tomatoes were the earliest and sweetest. They have continued to produce a daily harvest since early August. 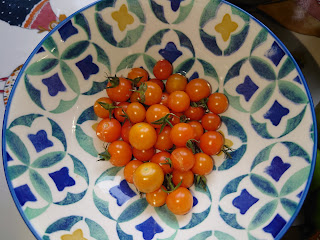 A noveltiy this year has been Costoluto di Fiorentino. Costoluto translates from the Italian as ribbed. 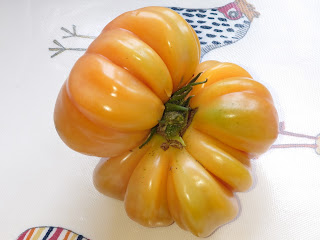 These have started ripening about two weeks ago.

The other novelty was Black Russia. Given the black it really is hard to know when these are ripe. Both varieties are ideal for cooking... 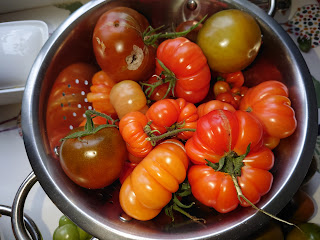 ...or preserving if they are still green. 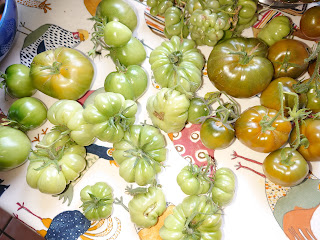 Not a bad year for tomatoes! 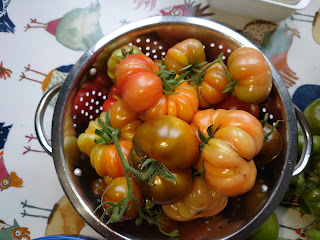