At -6 C it has been the coldest night so far and I am reluctantly accepting that we have moved straight on to winter mode.

One autumnal novelty that has worked a treat this year is Endive Pancalieri. It tolerates cold and thrives just as all the usual lettuces are grinding to a halt. 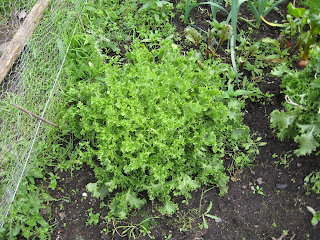 It looks like a loose leaf lettuce but has serrated leaves rather than the rounded oakleaf we are used to, and is sold by the supermarkets in bags as 'Frisee'. Although the leaves are green they are best blanched in order to minimise the bitterness that can develop as the temperature drops. Here is the result of my experimentation: 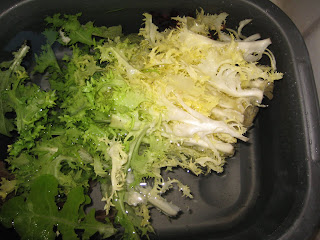 The crisp and sweet blanched stems are encouraged by holding the rosette up with a loop of string. In the row of three below the middle plant can be seen before and after tying up.


The loop can be lowered for harvesting and then pulled back up again if the whole plant is not being harvested at once.  Meantime the next rosette can be tied in readiness for harvesting in a week or two.They are quite voluminous and the stems seem to cluster in groups even though I am sure each rosette is just one plant.

As these are across town at the allotment I am not sure they have survived the current frost, but so fare they have been a roaring success and I will be growing them in future years so as to extend the salad season into the colder months.

p.s. Endive is a member of the chicory family.  I am also growing some chicory proper to be dug up and then forced for 'chicons'  still later in the growing year.  Watch this space!

Mal
Allotment holder for 20+ years. Formerly of Mal's Allotment blogsite but ran out of space. Switched here 25/11/12. My main aim is to record progress at the allotment, but I sometimes digress.